Today the parent company of the Epic Poker League; Federated Sports & Gaming filed for Chapter 11.  This is certainly another dark day in the poker industry which is something that has become all too commonplace over the past year.  While this filing is clear evidence that the EPL is in financial trouble, we can take some solace in that they filed Chapter 11 bankruptcy and not Chapter 7 bankruptcy.

The short version of the differences between Chapter 7 and Chapter 11:

Chapter 7 bankruptcy = Liquidation bankruptcy.  This is what you normally hear about in the news when a company is actually going under.  In this case a company will be forced to sell off any un-exempt assets in an attempt to pay off all creditors.

Chapter 11 bankruptcy = Rehabilitation bankruptcy.  This is what the EPL filed for today.  In this case no debts are absolved and it allows for the company to reorganize its debt.  This is typically done to allow the company to pay back its debts from future earnings rather than selling off its own assets.  If the company is unable to keep up with its debts after some reasonable amount of time then the company will be forced into Chapter 7 bankruptcy.

So, I am in no way trying to say this filing is a good thing for the prospects of the EPL.  It is still important to understand they are not necessarily finished as a business, even though it would seem difficult for them to attract an investor or a partner that is willing to put up an outlay of $1.4m in the very next event(s).  $1m freeroll + $400k added to the the 4th event.  In talking to Dan Shak today, who has a great mind for these things; he suggested the EPL forget about the 4th event and just run the $1m freeroll event as a $750k freeroll to save half the cash they are scheduled to give away to finish their first season.  I believe this is a first-rate idea that would show a reasonable amount of good faith to the players and enable the staff and media to continue their work for the EPL to finish out the season.  I think this could satisfy all parties involved.

This story of the EPL is nothing like Full Tilt Poker.  They are not holding player funds.  They took nothing from the players in the form of rake or any other expenses.  The players who took part in the league have benefited in the way of $400k added to the prizepool for each of the first three events.  The players were treated royally in the way of “all expenses paid”.  The EPL did make a commitment to the players in the way of a final $1m freeroll that they probably won’t be able to keep, but it never seemed to me that they have had any malicious intentions.  The EPL is/was a startup business that had every intention of being successful but like many businesses out there it is having trouble keeping afloat.

I gather from reading twitter and listening to some friends in poker media tonight, my opinion might differ from most.  But, I do not feel that I got slighted by the EPL even if they never have another event after today.  I played in all three events with the $400k added.  I thoroughly enjoyed the experience and would do it all over again next year even if there was no added freeroll promised in the end.  Sure, it would be great for me personally if they still had a freeroll coming up since I am currently one of the top 27 on the list, but I am not going to try and say that is the main reason I played in the EPL events.  I didn’t play in the EPL to support Annie Duke or Jeffrey Pollack.  I played in the EPL because I wanted to support something that is good for poker and at the same time might be slightly profitable.  And I know a majority of my colleagues felt and did the same.

This is not a Full Tilt situation.  Should the poker community really be so harsh on the people who attempted to build something that if successful was so undeniably good for poker? 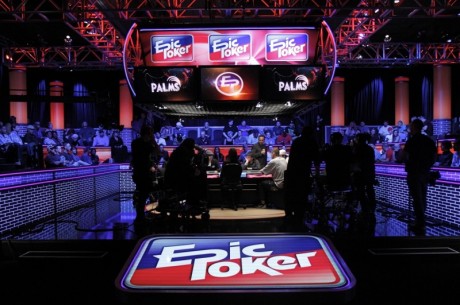